Delighted for Ireland’s Shane Lowry on winning the Open Championship at Portrush last Sunday in tremendous style.  Cool and collected, he dominated the field from day one and looked like a veteran at links golf with his stunning performance. 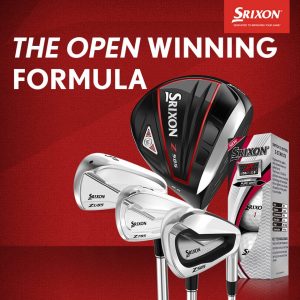 Shane uses the very popular Srixon Z585 Driver, as well as a combination of Srixon U85 Utility, Z585 and Z785 irons in his bag.  He also uses Cleveland RTX4 wedges in his bag and made his Z Star ball do amazing things with his short game wizardry.

Srixon and Cleveland products are available Custom Fitted and Built by European Clubmaker of the Year, Peter J Doyle of Precision Fit Golf.  We are Ireland’s only component account for Srixon and Cleveland equipment, so it’s good to know that your clubs are being assembled by one of the top clubmakers in the world.

Also, check out Srixon Europe on their Facebook page where they are running a competition in conjunction with Shane Lowry’s success.  You can win one of 8 Z585 Drivers as well as a sleeve of Z Star Balls which his lucky shamrock.

Well done again Shane, one of the best golfers from the island of Ireland, now down in history as an Open Champion.

We Fit We Build You Perform